Working on the description of Hyphodiscus sp. nov.

One of our current projects concerns an interesting Discomycete species from Hyaloscyphaceae found several years ago on shed leaves of Andromeda in Mukhrino bog. I picked it first during the study of Andromeda fungal consortium. The species was no assigned to any existing description, and seems to be a new taxon. H.-O. Baral made his comments about: “You fungus is unknown to me. It resembles a Hyphodiscus but it would not surprise me if it goes elsewhere.” On this basis, the goal is to find out the taxonomical position of this species by classical morphological and molecular methods. Presently, i am collecting more and more litter of Andromeda to gather enough apothecia for molecular analysis and for the deposition in the herbaria. The species is regularly met, but it is not abundant, so that a lot of leaves should be browsed under the lens. I am collecting the leaves with the apothecia as well as trying to remove the apothecia by the needle to store them in a test-tube (for the molecular analysis). The description of the morphological characters and pictures were done in vital state (see prepared plates below). There was an attempt to cultivate it in pure culture. For this, the whole apothecia were removed from the leaves and inoculated on the media (PDA). And while this way brings high contamination (the apothecia are not clean from fungi and bacteria themselves) compared to more elaborate technics (single-spore inoculation), there are several cultures growing now that could be potentially the anamorphic stage of the species. One of them has lobed fan-shaped colonies that stain the media in bright pink color. But it need more time waiting for it to sporulate to determine its true identity. Finally, i hope that Eugene Popov will make the molecular work. He already tried to do this last year, but the were too few of apothecia and/or they were contaminated, that probably caused failure. It will need more thorough work.

I hope that this species will finally described. It has beautiful apothecia which appear on the underside of the Andromeda leaves. It is probably a weakly parasitic species, as it grow on recently shed leaves. And it is highly host specific, was never found on other species in the bog. Very interesting from ecological perspective, and also could be important one in the taxonomy of Hyaloscyphaceae. 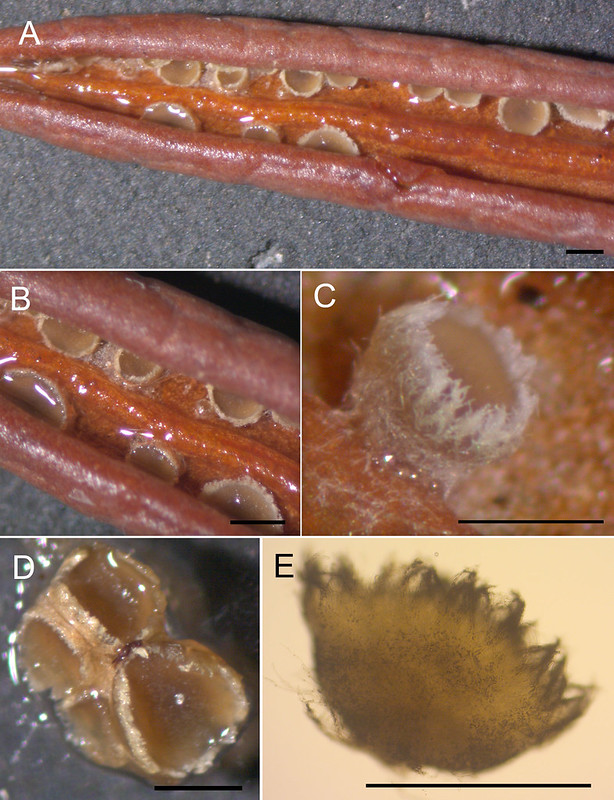