Finished field season, i am currently processing the field notes and transferring all data into the databases. Most of the past field season was devoted to studying communities of Larger fungi in vicinities of Shapsha village. We call this project Shapdiv (abbreviation of Shapsha diversity). It is the second year already spent working on the same 10 plots and thus some comparative analysis could be done between years. The methodology of work and first year results were described in detail in our going soon paper (Filippova, Bulyonkova, The diversity of larger fungi in the vicinities of Khanty-Mansiysk; under review currently).

10 plots were established in different types of forests corresponding to different stages of post-felling succession (plus one plot in bogged forest on peat). The plots were regularly visited during the season and all fungal bodies were collected and counted. Plot visits were supplemented by random walks in proximity to find rare species and habitats. Total collection of 2015 reached 1500 specimens and revealed large diversity of 463 species. We had not performed quantitative analysis and comparison of different communities based on 2015 season. There was not enough time to make this work, the next season come quickly, and now had passed. Thus, quantitative analysis will be done for two years at once.

There is still a lot of work with identification of collection-2016. But now i want to make the first sketch of the fruiting dynamics between two years and present in an album the photographs of the habitats. The weather conditions of two years (2015 and 2016) were very contrast: extremely wet and cold 2015 and dry and hot 2016. The substantial rains started only in the end of August-September in 2016 and the autumn was longer. The fruiting responded to these conditions very distinctly: 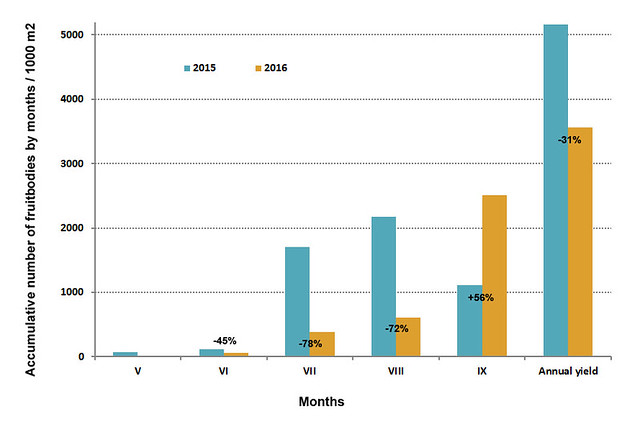 I had not visited the plots in May in 2016 due to my absence in Khanty-Mansiysk (but fruiting in this month is very poor anyway). Following three months (June-August) in 2016 were very poor due to drought, fruiting decreased compared to 2015 by 45-78%. The rains started by the end of August triggered abundant fruiting in September (whilst in 2015 the first frosts in mid-September reduced the fruiting). Thereby, September in 2016 was twice more fruitful compared to 2015. Nevertheless, total abundance of wet 2015 year  was  larger by 30%. 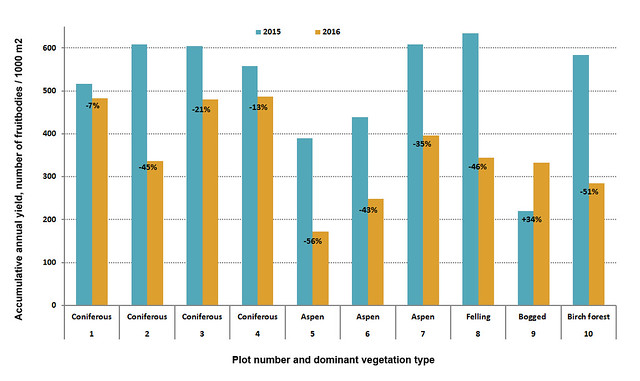 Interesting picture above shows comparison of total annual abundance between plots, with increase/decrease shown in %. It is the subject of future statistical analysis and discussions yet, but prior picture shows weak decrease in coniferous and larger decrease of fruiting in deciduous forest in 2016 compared to 2015. (only one plot in coniferous forest – Plot 2 – which is located on slope, has a larger decrease) Conversely,  the paludified (bogged) forest fruited more during the dry season of 2016. Perhaps it’s not a new discovery, as i found this in an old Mushroom guide:

.. 🙂 but still interesting to see these pictures.

And below is the album where i started to collect the photographs of habitats where the study is performed. This could be an important supplement to the data published in our paper and for future publications: 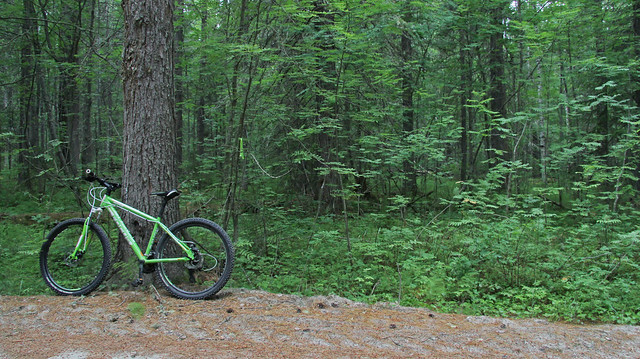