Overview of the mycological research in the Northern West Siberia

Agaricoid basidiomycetes are less studied group in the Yamalo-Nenets Autonomous Okrug compared to the southern region. Sporadic studies were conducted in the Polar Urals by Kazantseva 1966, Kazantseva 1968, Kazantseva 1970, Knudsen and Mukhin 1998, in the Southern Yamal by Tarchevskaya 1985a, Tarchevskaya 1985b, Tarchevskaya 1986, Tarchevskaya 1990 and in the Tazovskiy peninsula by Kapitonov 2015. Regular inventories and herbarium collections were conducted at several field stations of the Botanical institute of Komarov working in the region in the second half of XX century Karatygin et al. 1999. The collections made during this period are stored in the LE herbarium (Saint-Petersburg) and later processed in a series of publications Kovalenko 1999, Malysheva 2018, Nezdoiminogo 1996, Nezdojminogo 2001.

Lignicolous basidiomycetes are a well-studied ecological group in the North of West Siberia. N. T. Stepanova-Kartavenko initiated the inventory of the middle Urals Stepanova-Kartavenko 1967 and made some works in the Polar Urals Stepanova and Sirko 1970. L. K. Kazantseva dedicated the study of wood-decay mycobiota to the northern regions of the Polar Urals and Yamal Kazantseva 1971a, Kazantseva 1971b, Kazantseva 1972. V. A. Mukhin analyzed the biogeography and ecology of lignicolous basidiomycetes in West Siberia, from the forest-steppe zone in the South to the tndra-steppe in the North Mukhin 1984, Mukhin 1987a. The same author examined the local mycobiotas in several publications Mukhin and Stepanova 1982, Mukhin and Stepanova 1983, Mukhin 1983, Mukhin 1987b, Mukhin 1991, Mukhin and Olshvang 1983.

A number of works was performed to study fungal pathogens of plants in the region, by Z. A. Demidova Demidova 1962, Demidova 1970, L. K. Kazantseva Kazantseva 1967, and N. T. Stepanova Stepanova 1970. Some records of pathogens of cereals are reported in the monograph by N.N. Lavrov on the mycoflora of cereals of Siberia Lavrov 1951. A series of inventories performed at the former field stations of the  Botanical institute of Komarov (collections stored in LE) were summarized in Karatygin et al. 1999.

Myxomycetes of the Urals, including its northern territories, are described in the PhD thesis by K. A. Fefelov Fefelov 2006 and collections stored in LE summarized in Karatygin et al. 1999.

And B. V. Krasutsky was deeply engaged in the ecological study of fungivorous Coleoptera communities Krasutskiy 2007, inventorying several localities in the region.

Marcofungi were studied in a number of districts, but the most thoroughly studied area being centered around Khanty-Mansiysk, and in the south-east part, in and near the Yuganskiy nature reserve. The nature reserve has been inventoried since 2007 in a number of studies: Zvyagina et al. 2009, Zvyagina, E.A. and Baykalova, A.S. 2017, Zvyagina et al. 2007, Zvyagina 2012, Zvyagina 2015. In the Khanty-Mansiysk vicinity, the inventory was targeting particular communities of peatlands and forests Filippova and Thormann 2014, Filippova and Bulyonkova 2017, Filippova et al. 2015. The permanent plot-based monitoring of macromycetes fruiting dynamics was initiated since 2014 in different vegetation types (Filippova et al. 2014, Filippova and Bulyonkova 2017). Some other protected areas of Yugra were visited by different researches and the checklists were published Zvyagina and Vasina 2015, Kapitonov 2012, Makarova et al. 2015, Shiryaev 2002.

The phytopathological studies are developing in the city of Surgut. The flora of  fungal pathogens of the city parks of Surgut was studied for many years by T.A. Marakova and colleagues Makarova et al. 2011, Makarova and Makarov 2016.

The communities of microfungi and yeasts were sampled in a study of mycobiota of raised bogs Filippova 2012, Filippova 2015, Filippova and Thormann 2015, Kachalkin 2010. Some works were devoted to the study of the influence of lichens on soil micromycetes Tolpysheva 2006. 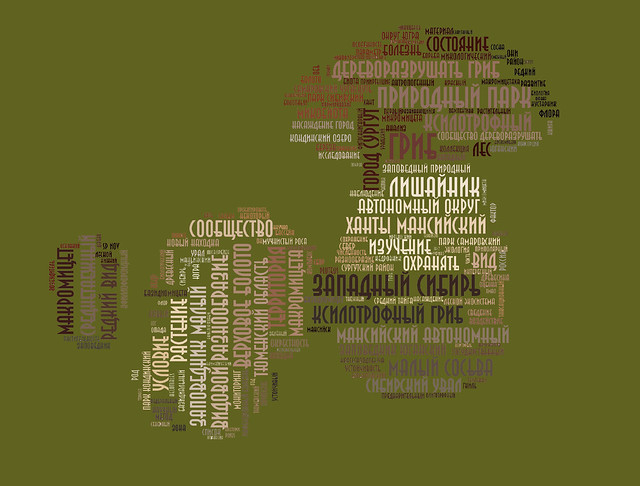 The figure shows a cloud of words that resulted from the analysis of the Titles of mycological publications in Yugra. To compile the graph, Ilya Filipov used the following algorithm: the tokenization (normalization) of the Russian text was made using a morphological analyzer for Python – the pymorphy2 library; a word cloud is built using the worldcloud library.