Initially this was the subject of my PhD and it continues to be in the area of interests. The community of macromycetes (its composition, quantitative structure and phenology) was studied in two bogs near Khanty-Mansiysk as well as in several expeditions in the region. Also a series of observations of bog plant litters were initiated in Mukhrino field station with regular observations of the substrates, collection and identification of fungi and description of their communities qualitative and quantitative structures. Several interesting and expectidly new species of discomycetes were discovered during the project with one species being newly described in a publication. The diversity of wood decomposing corticioid and aphyllophoroid fungi of bog pines was studied a little. The work in this area of interests is continues in regular observations of plots located along the boardwalk of MFS for counting macrofungi. The interesting collections of discomycetes are worked out from taxonomic perspective with great help of the specialists in these groups. The diversity of wood decomposing species is also under next round of identification. And recently we aided another community of fungi of raised bogs: i.e. corticolous myxomycetes (the substrates were collected and currently processed in Novosibirsk). Still it is rather isolated works on the fungal community of raised bogs touched from different perspectives. I hope to initiate some uniting research project in the future with metagenomics analyses in addition to classical ways of studying the diversity.

Decomposition dynamics in different ecosystem types in the area

Decomposition is part of the nutrient cycle and its rate determines carbon balance of a particular ecosystem. Being an important part of biogeocoenological studies, decomposition rate is particularly studied in monitoring programs of field stations. The focus of our research was to estimate the decomposition rates in major ecosystems types in middle taiga zone of Western Siberia. For this purpose, the classical approach of litter bags was used, including standard litter type (tea) and native litters in natural as well as in experimental conditions (temperature raise).

See more details about this project and the database for upload
And also:

The larger fungi is the most well-known to the public group of fungi and thus requires information about its diversity and other features in the region. We initiated a series of permanent plots and routs in vicitinity of Khanty-Mansiysk (Shapsha village) to describe the species composition, quantitative structure and dynamics of communities in different forest types. The logging being the main factor of disturbance in the area, we chose several stages of after-cut succession to locate 8 plots. The other 2 plots were located in two sites undergoing paludification. The plots are supplemented by random routs to discover rare species and cover rare habitats. The methods of sampling follow those recommended in (Mueller et al., 2004, Biodiversity of fungi ..). The plots and routes are visited regularly thus covering the whole vegetation season and allowing to describe the phenology of fruiting. This project has many practical values, as description of edible and poisonous species composition in the town’s vicinity and their abundance. Also the plots could be used for educational foray of regional Mycological society. The counts would allow to estimate rare species abundance and possible threat.

Fruiting dynamics of macrofungi in relation to climate parameters

Plot-based regular visits of fruiting dynamics of macrofungi create a series of observations with data on community structure which could be related to weather parameters. Observation of temperature and rainfall regimes is accomplished by a series of automatic loggers installed in plots. Although theis project started only 5 years ago, there are some interesting results related to weather dynamics and fungal fruiting. More results would be received if the observations will be continued for decades and some mathematical analyses are applied to collected data. 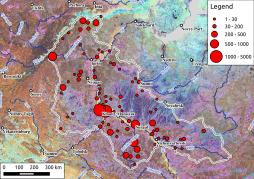 Since all research projects yield some collection material from different habitats and areas, the collection of Fungarium grows embracing the diversity of fungi of different taxonomic groups. There is no local Funga or other monograph on fungal diversity of Yugra (or taiga zone of WS) and this collection could be helpful in closing this gap. Currently several collection are worked out by the specialists (i.e. Entolomas) to deeply study the systematics of these groups in the region. Another part of this subject, i.e. literature review of research made in the region by different mycologists, was accomplished by the team of researchers in two publications and a related database. Currently there are about 2500 species of fungi described in Yugra according to this database.

Biodiversity data are difficult to collect but also difficult to store without proper computer technologies. Thankfully the area of biodiversity informatics deals with not only proper storage and management of the data, but also allows global access and analysis of accumulated information. The problems of management of biodiversity data start from the development of an electronic database of the Fungarium’s collection and goes further to export of these data to global databases (like GBIF) and development of a regional platform for accumulation, analysis and promotion of biodiversity data. In relation to the Fungarium’s database, we initiated an online database using Specify software in 2015 and continue its development. The goals is to make a platform for export of these data to global databases and develop a regional platform for wider uses of biodiversity (including fungi) data, which was a project applied for a grant in 2018.

Natural dyes from mushrooms in Yugra

This area of interest is a student research project, see more for details in Student projects.